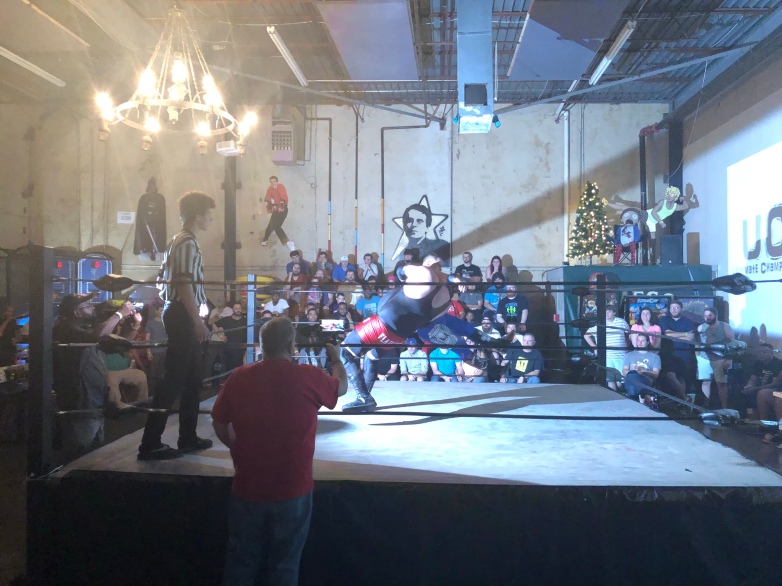 I have a confession to make: I am a fan of local wrestling.

Yes. I absolutely mean THAT wrestling.

After leaving the latest epic evening of UCPWS (That’s Ultimate Championship Pro Wrestling South to you normies), after all the goodbyes were said, a thought struck me as I looked back over the videos and photos of that night: How did this happen? How did I become one of those people?

It’s a tricky question, and like many people who end up in the depths of an addiction they hardly understand, the answer is often an unsatisfying “I just wanted to see what it was like,” which is almost always followed by a shrug of resignation.

What started it for me was the need for a fun night. I had recently come out of a rough season and needed to mix things up. I was pulled in by the promise of a weird evening and the low entrance fee of $5 dollars, and I was rewarded with sights and sounds that made me question my sanity, powers of logic, and my image of myself as a semi-mature adult. The friends who came with me the first time all felt the same way, and we left saying we would have to come back. And come back we did. Over and over again.

I understand this may not be for everyone. Some people just can’t handle too much of a good thing, or pool cleaners from a backwater in Mississippi masquerading as a dastardly villain of the squared circle in spandex tights that allow you to see every second cheeseburger he probably should have turned down. But, if you haven’t turned away yet, I have some helpful tips to ensure the best experience possible, should you decide to dip your toes into these strange waters.

1. Watch some videos of Macho Man Randy Savage. Or more precisely, the legendary “Cream of the Crop” interview leading up to 1987’s Wrestlemania 3 in Pontiac, Michigan. As the story goes, Savage was challenged to turn whatever he could find on the craft services table into the key prop for his next promo, which he often made up on the spot. Savage responded to the challenge by grabbing a handful of coffee creamer packets and delivering one of the most insanely quotable few minutes in history. I tell you to watch this for one reason: if this makes you say, “No, this entire enterprise is far too stupid,” then you stop here, and no harm no foul. But if you see this and think, “This is pretty hilarious and weird,” then move on to step 2.

2. Find out where and when the next local wrestling event will be. When I say “local” I don’t mean the next time Monday Night Raw comes through your town, I mean the local circuit that does events at county fairs and high school gyms. More than likely there are some regional outfits operating within your general area, so do some internet digging and see what you can find. If they barely have a website or their website is nothing but a link to a Facebook fan page, you’re on the right track.

3. Go to the event COLD. Don’t read up on the wrestlers, the storylines, the history, anything (it’s doubtful you’ll find any literature anyway). Go in completely cold. You will thank me. The more confused you feel, the better it is. For example, I thought this was literally a child at one point before his match. (The laughing you hear is me and the words of confusion are the people behind me and my friends)

4. Check your brain at the door. This is not the time to remind yourself that you’re an adult who pays bills and has responsibilities. This the time to watch a large man try to squish a smaller man like a bug.

5. Watch the crowds. The people-watching is often arguably better than the action in the ring, and they will help inform you on who you should be rooting for and against in most cases (unless you like supporting the heels – aka the bad guys). Keep an eye out for eccentric characters and the way they support their favorite wrestler. For all you know it may be their grandson. If you want evidence of why you should watch the crowds, check this guy out.

6. Yell at people. Yelling at random people pretend beating each other engages you in the action far more effectively than trying to mentally process what is happening ever will. This is not the place for thinking. So heckle them, shout at the referee for counting too slow, play along with the show. For example, a tag team had a religious theme (one of them going so far as to name himself Deacon Reno Nevada), and while they were getting utterly destroyed in their match against a bunch of muscled up frat bros who looked like they followed up their Muscle Milk with more Muscle Milk, I started to shout my biblical knowledge at them in the hopes of reviving their chances. I told Deacon Reno Nevada to “beat the devil out of them” and to “hit them with the Word because it doesn’t come back void”. They ended up winning their match and I was splashed with what appeared to be holy water out of a tin bucket, so it was a winning night all around. Heckling is a key piece to your enjoyment of the evening. If you see someone about to get body slammed, scream for the ref to stop the match, tell a wrestler how big and strong he looks, or that his mother doesn’t love him. Whatever works for you.

7. Bring friends. Having people to do this with is key. If you do this alone it’s just weird. I brought my girlfriend with me and my friends last time and she didn’t break up with me at the end of the night, so I would say it brought us closer together (she also yelled for a zombie-themed wrestler to eat his opponent’s face at one point, and that was a real bonding moment). 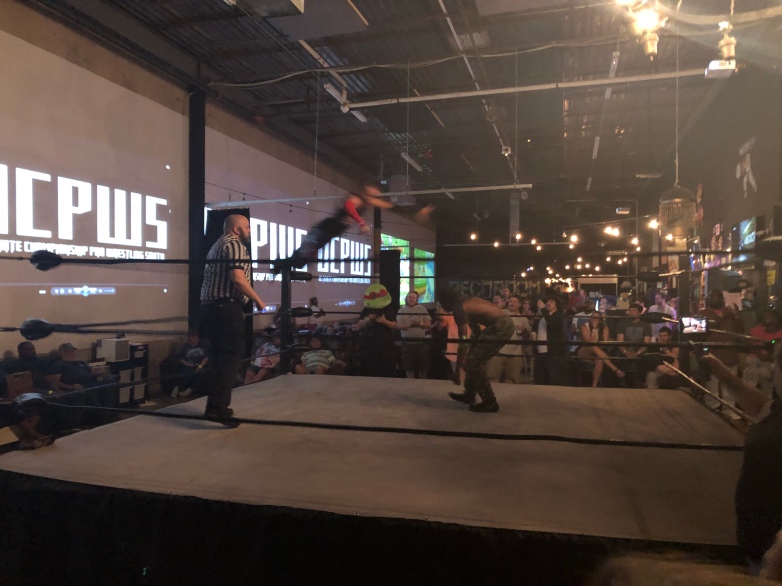 In closing, if you’re looking for something ridiculous and fun to do on a random weekend, check out local wrestling. I never thought I would consider myself a fan of this nonsense, but sometimes fandom doesn’t make sense. Do I know the storylines? Somewhat. Do I know who the wrestlers are? A few of them. Do I know without a shadow of a doubt that it’s fake and meant to entertain? Absolutely, and I plan on going again whenever some friends can join. So gather some friends, be loud, be silly, and see what happens. For me, it’s the best $5 you could spend on a Friday night.