Something I’ve noticed about many movie buffs these days is that there is no middle ground any more. Movies are either terrible or amazing, Oscar-worthy or straight-to-DVD. It feels like the days of “OK”, “pretty good”, “mindlessly entertaining” are either gone or quickly fading away. This saddens me. Now, I love a quality film that challenges and is artistically pleasing to the eye and soul, but sometimes I like to turn my brain off. Sometimes I need a taste of the ridiculous. The sweet relief for these cravings? Stupid action movies, and since it is summer time, the season of mindless action movies, I decided to share my five favorites.

I first saw this movie when it came on NBC one Sunday night after church when I was 11 years old, and it was a transforming experience. There were so many things running through my mind as I watched it, most importantly: “You can take people’s faces off and trade? HOW CAN I TRUST ANYONE ANYMORE?” 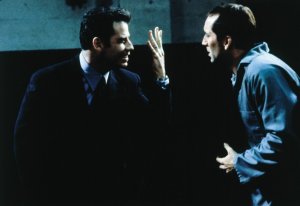 This movie deserves a place on the Mount Rushmore of ridiculousness. Nicolas Cage starts out as the villain with John Travolta playing the hero, but then they switch bodies, so now Cage is the hero (in the original villain’s body) trying to convince people he’s the villain ALL WHILE Travolta is now the villain (in the hero’s body) trying to convince people he’s really the hero as he’s undermining everything. That means Cage and Travolta have to play 3 different versions of one character! They have to play their original parts, but then have to play the part of their adversary trying to play the original part. It’s acting inception, and it’s so outrageous that you just have to buy into it. The movie is worth watching for that aspect alone, but the awesome action scenes and stylish direction by action-overkill master John Woo make it a fun ride. It features gratuitous slow-mo, carnage being set to a children’s song, a Mexican standoff in a church after a funeral, explosions galore,a boat chase and speargun kill to boot! What’s not to like?

Looked upon objectively, this movie is awful. But that doesn’t stop it from being a blast to watch. I LOVE THIS MOVIE.

For years you could turn on CMT on a given Saturday afternoon and you would likely come across this flick. Writer Bill Simmons once said Road House needed to be experienced on it’s own timetable, and in this respect he’s absolutely correct. It failed in theaters in the 80’s but found a cult following once it started landing on cable. I stumbled upon this masterpiece of 80’s machismo as a teenager one random Saturday and immediately fell in love with it. Before Road House, my experience with Swayze had only been the following things: Dirty Dancing, Ghost, and that classic Chippendale’s bit with Chris Farley on SNL. To go from that to seeing Swayze as a philosophy-degree holding throat-ripping kung fu fighting bouncer was a jarring and magnificent experience. It lead me to the two other Swayze actioners Red Dawn and Point Break (Which could be worth a post within itself), and for that I am forever grateful.

Swayze didn’t really look like an action star, but if you saw this movie you’d never doubt he was one. Swayze was not known as a guy who headlined movies with taglines like “Dalton lives like a loner, fights like a professional. And loves like there’s no tomorrow.” Swayze went from Dirty Dancing to this completely out of nowhere. The only equivalent I can think of is Gerard Butler following up Phantom of the Opera with 300. Any movie with blues music, Sam Elliot as a mentor-bouncer, monster trucks crashing into things, ridiculous dialogue like “Pain don’t hurt”  and explosions is worth a watch in my mind. This movie is gold.

We have another Cage sighting here, and this one has the added bonus of living legend Sean Connery inspiring the whole “old guy reemerges as an action star” movement that Liam Neison brought to the forefront in 2008 with Taken. The story involves a rogue general holding the city of San Francisco (and some tourists) hostage by planting some chemical weapons on Alcatraz. Commandos are called in to eliminate the threat, but they need a way inside. Bring on the only man to ever escape Alcatraz: Sean Connery, er, I mean John Patrick Mason, an ex-MI6 agent who was imprisoned for spying on the US. Nic Cage plays the scientist who is an expert in chemical weapons (believable, I know), and together they must fight to retake the Rock and save San Francisco. 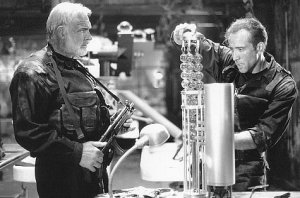 Connery easily steals the entire movie with his masterful sarcasm and action movie chops. You believe the old fella can kill every person in any room that has ever existed in the history of mankind with nothing but his white beard and handgun with a single bullet. Cage is his usual and manic self, which makes you wonder how a guy who sometimes acts like he should be in a mental ward is regarded as one of the greatest minds in chemistry in the world. Oh well, this is Michael Bay we are talking about here. Gunfights, fistfights, car chases, explosions, and amazing one-liners make this is Michael Bay’s best movie, at least in my opinion.

The Governator in his prime was and still is a sight to behold. On paper, a foreign bodybuilder becoming arguably the greatest Hollywood action star of all time should have never happened, but my goodness Arnold made it happen. His run of 80’s and 90’s action flicks (The Terminator, Predator, this film, Raw Deal, The Running Man, Total Recall, Kindergarten Cop, Terminator 2, True Lies, and Eraser) is the film equivalent of the Spur’s since Tim Duncan joined the franchise in 1997. It’s a run of success that is yet to be topped in pop culture, creating memorable lines and memorable moments. For me, the beginning of all this was Commando.

The premise is simple: An ex-special ops commando named John Matrix (yes, that’s his real name) goes on a one-man rampage against the men who kidnapped his daughter. Arnold is like Jason from Friday the 13th in terms of strength and invincibility, but unlike Jason, Matrix is governed by a bloodlust for justice that enables him to take out entire armies and jump from moving airplanes with a complete disregard for the laws of physics. The last half of the movie feels like a video game when you have all the cheat codes on. Highlights include: a soundtrack that sounds like an orchestra having a seizure, an overweight, mustached-man wearing chain mail going toe to toe with Arnold, and a woman who goes from unwilling hostage, to hesitant accomplice, and then soon-to-be romantic partner all within the course of 48 hours during the film. You owe it to yourself to see this. Why? Because Arnold eat’s Green Berets for breakfast.

Pop quiz hotshot: Who would have zero desire to see Speed after watching that trailer? Answer: No one.

As cool as The Matrix films were (mostly the first two), this is the most pure action film Keanu has ever made (beside Point Break and the EXCELLENT John Wick). It has no philosophical speeches, questions about the relationship between machine and man, and references from everything to Christ and ancient Greek/Roman mythology. No sir. This movie is about a cop named Jack trying to stop a bus from exploding. That’s it. And that’s all you need. Keanu absolutely crushes this movie with the power of a C4 explosion on a hot and sunny day. He looks the action hero part, which is pretty amazing to consider when you realize his biggest movie before this was Bill & Ted’s Bogus Journey. The rest of the cast is just as solid: Dennis Hopper completely hams it up as a psychotic mad bomber, eventual OSCAR WINNER Sandra Bullock plays the most attractive woman I’ve ever seen ride a bus, and Dumb and Dumber hero Jeff Daniels is Jack’s buddy on the police force.

When you watch the movie you have a hard time believing that a giant bus can maintain a speed limit above 50 miles-per-hour when it’s taking sharp turns, hitting other cars, driving through downtown LA, and hopping impossible and strategically placed gaps in the highway, but I guess that’s the power of Keanu. When you’re The One, there is no spoon. Or gravity. Or physics for that matter when you really get down to it. Originally written by Graham Yost (who would later develop the modern classic Justified) along with the now legendary and uncredited dialogue rewrite by Joss Whedon, it’s an excellent example of how an action movie is properly done.

This movie is a thrill ride, which is the entire point. It’s meant to keep your heart racing like it’s on… Speed.

Oh yeah. See what I did there?