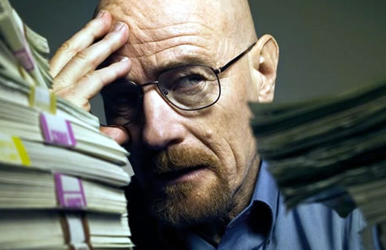 (Warning, if you are not caught up on AMC’s Breaking Bad, then stop reading now. Spoilers abound up ahead. You’ve been warned, so don’t email me about ruining the show. You read at your own risk.)

I am a firm believer in the fact that AMC has the best 3 shows on TV right now (No, I haven’t seen Homeland yet. I’ll get to it some day) with Mad Men, The Walking Dead and Breaking Bad. I’ve already talked about Mad Men before on this blog, and today I’d like to share my feelings on Breaking Bad, or more importantly, the character of Walter White, played brilliantly by Bryan Cranston. The main focus of the show, Walter White starts out as a meek high school chemistry teacher who learns one day that he has terminal lung cancer. At first he keeps the news a secret as he tries to figure out what to do to make sure his family is taken care of, trying to take into account the financial strain of providing for his pregnant wife Skylar and his handicapped son Walter Jr. Through a series of events he becomes connected with Jesse Pinkman, a former student of his and a small time pot dealer. Walter approaches Jesse with the idea of cooking crystal meth to pay off his expenses and make sure his family is safe, Jesse agrees, and they start cooking meth. Four seasons later, we’ve seen Walter’s descent into darkness as he further becomes less easily separated from his drug dealing alter-ego Heisenberg, cleverly and ironically named after the Heisenberg Uncertainty Principle, which states that according to quantum mechanics, an object’s location, no matter how small or large, can never be determined. This idea is true of Walter’s morality. As his cash flow continues to grow, he further becomes more tenacious in his fight for survival against his rivals, threats, and even overseers. Walt starts out as an emasculated doormat but then slowly turns the tables, proving himself through his brains, willingness to act, violence, and his manipulation of others. Now, only 8 episodes away from the end of the show, Walter has become the king of his domain, feared by those who used to love and trust him. It’s a complete character transformation, and it’s horrifying yet riveting to watch.

Within the annals of psychology there is the classic thought problem of the man who steals to get medicine for his wife because he has no other options and she will die if he doesn’t. The question deals with moral law versus civil law. Was this man in the right to break the civil law? But to some the very act of breaking a civil law breaks moral law, so where does one draw the line? It’s definitely an interesting question to raise, and everyone who looks at it has to come to their own conclusion. When you look at Walter’s motivations for cooking meth when he first starts, the average person can understand it, or even go as far to justify it. He’s a poor chemistry teacher who knows his family will be financially dead in the water when he’s gone unless he does something about it, or at least that’s the conclusion he comes to in his mind. As the show progresses, what was at first motivated by love becomes hijacked by Walt’s deep seeded need for respect and his growing ego (As displayed brilliantly in this now classic moment). Pride and power become the real motivation, and the further down the rabbit hole he goes the less likely he’ll ever come out. The thing that has struck me so much about the show is how it captures the capacity within us all for evil.

The thing most people don’t realize about evil is that it almost always presents itself in two ways: something good, or an option to a circumstance. In Walter’s case, evil presents itself in both ways. He gets terminal lung cancer, and cooking meth is a quick way to get a lot of cash for his family to be secure. An option to a circumstance that is something good for his family. Watching it I couldn’t help but wonder what I would do if I were in the exact same situation. How desperate would I have to get to consider doing such a thing? His intentions were certainly noble enough, but as a wise man once said “The road to Hell is paved with good intentions.” What started out as a tainted but noble enterprise becomes one man’s dangerous obsession stemming from his thirst for power, and it’s all because of the slippery slope. Walter had opportunities to get out, to come clean, to save his family, and every time he couldn’t let himself get away, he continually puts himself back onto his own path of damnation. Walt is a master manipulator, even recruiting his wife into his business to do his money laundering.  Are we all capable of the same thing? How often do we find ourselves justifying the things we do more and more, until eventually we are in a place we never intended. We do the same thing with many of our vices. The sex addict never sets out to become that, they just wanted to watch a little pornography. The two kids in the backseat don’t immediately have sex, they push boundaries here and there and then suddenly they’re both scared and ashamed. The drug addict thinks to themselves “What harm will trying it do?” The slippery slope is what always gets us. We always think we’ll be the exception, that we can play with fire and never get burned, but step by step along the way, we find ways to justify it, find a way to turn off the guilt to service our own desires and pleasures. Walt has done the exact thing, changing into a murderous egotistic kingpin after first starting out as a scared, paranoid small time meth cook.

In Walter’s mind, everything he does is justified because he’s doing it for his family, and that is where he’s missing the point entirely. He’s already provided more than enough for his family, 10 lifetimes worth if you’ve seen the latest episodes, and yet he could have stopped a lot earlier and saved his family, and probably his soul. It’s such a strange feeling, watching a character you initially root for become the villain. It’s hard for me to think realistically that Walter will make it out of the show alive. He’s gone that far down the pit. I firmly believe he’s at the point to where he would consider killing someone close to him to protect himself. Maybe he’ll realize the error of his ways and find redemption, but if he does, it will come at a price. Breaking Bad is a study on how even the most mundane of us can be corrupted by evil, and how at the end it’s ultimately our choices that define our character.